skip to main | skip to sidebar

How to Plant a Tree: Adventures en Brousse A few weeks ago my new site mate, Kali, and her homologue, Jude Thera, took me out en brousse to teach me about PLASA Method. We went to Tayo, a tiny, extremely motivated Bomu town of maybe a few hundred located about 10 km from Tominian. Tayo is slowly trying to reforest an area donated by village chief with the technique Jude first taught them last year. We went out to plant 20 more trees.
PLASA is a dry season tree planting technique that enables Malians to plant while they have time during dry season, as opposed to when they're working in the fields during rainy season. The technique was developed by Jude for northern, extremely dry regions. After the initial planting, trees need to be watered only about three times...ever! It works by directing tree roots down toward the water table early, instead of allowing them to grow outward when the land is saturated with water. I'm sure there's a lot more to it...ask Kali.
Step 1: Dig a deep hole... 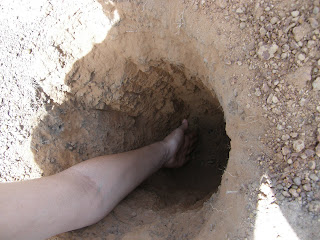 until the soil becomes moist. 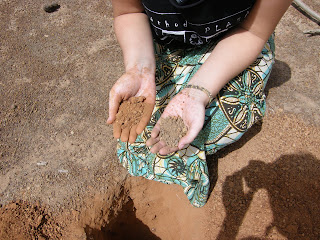 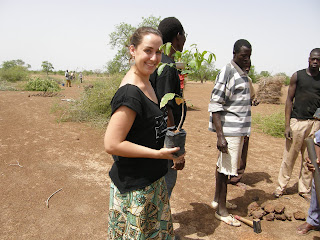 Step 3: Build a pyramid of moist soil and fertilizer at the bottom of the hole... 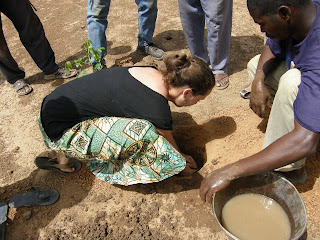 Step 4: Place the tree at the center of the hole... 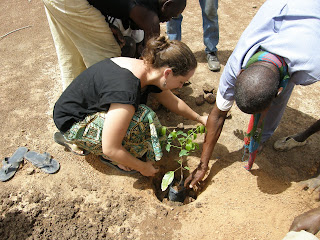 fill the remaining space with rocks and build rocks up around the base of the tree. 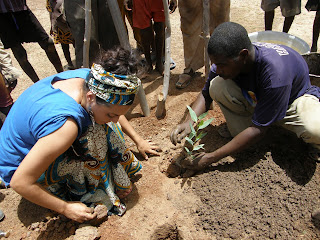 Step 5: Smile for the camera!Step 6: Protect your tree... 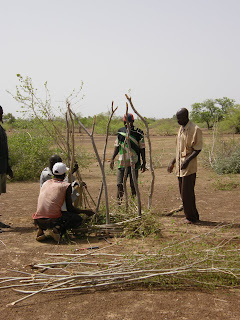 so that nothing can get in! 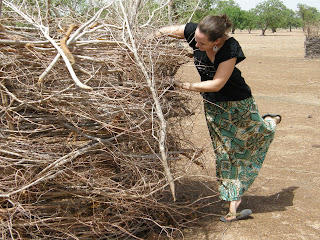 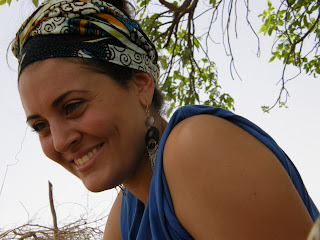 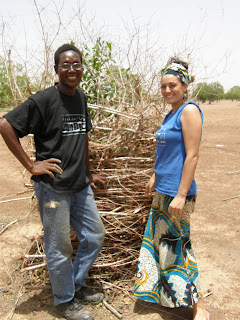 Hi there, all is going well here and ofcourse every one is sharing data, that's in fact excellent, keep up writing.

I do not know whether it's just me or if everybody else encountering issues with your website. It appears as if some of the text on your content are running off the screen. Can somebody else please comment and let me know if this is happening to them as well? This could be a problem with my web browser because I've had
this happen before. Thank you

Hello there, I found your web site by the use of Google even as looking for a related subject, your website came up, it seems
to be great. I've bookmarked it in my google bookmarks.
Hi there, just became alert to your weblog via Google, and found that it's really informative.
I'm gonna be careful for brussels. I'll appreciate should you continue this in future.
A lot of other people will probably be benefited out of your writing.

Feel free to surf to my website Male Enhancement

Hey would you mind letting me know which web host you're working with? I've loaded your blog in 3 different
web browsers and I must say this blog loads a lot quicker then most.
Can you recommend a good web hosting provider
at a honest price? Many thanks, I appreciate it!

Fantastic items from you, man. I have keep in mind your
stuff previous to and you're simply extremely excellent. I really like what you've
received here, certainly like what you are stating and the way by which
you assert it. You are making it enjoyable and you still
care for to stay it sensible. I cant wait to learn much more from you.

That is really a terrific web site.

What's up i am kavin, its my first time to commenting anyplace, when i read this piece of writing i thought i could also create comment due to this sensible piece of writing.

Every weekend i used to pay a quick visit this
site, because i wish for enjoyment, as this this web page conations genuinely nice funny information too.


Feel free to surf to my webpage; 1285muscle info

It's hard to find knowledgeable people in this particular topic, but you sound like you know what you're talking about!
Thanks

We're a group of volunteers and starting a new scheme in our community. Your website provided us with valuable info to work on. You have done an impressive job and our whole community will be grateful to you.

I blog often and I truly appreciate your content.
This article has really peaked my interest. I will take a note of
your website and keep checking for new information about once a
week. I opted in for your Feed too.

Amazing blog! Do you have any helpful hints for aspiring writers?
I'm planning to start my own site soon but I'm a little lost on everything.
Would you advise starting with a free platform like Wordpress or go for a paid option?
There are so many choices out there that I'm completely confused .. Any suggestions? Thanks!

Superb blog you have here but I was wanting to know if you knew of any discussion
boards that cover the same topics discussed here? I'd really love to be a part of community where I can get comments from other knowledgeable individuals that share the same interest. If you have any suggestions, please let me know. Cheers!

Wow, superb weblog format! How long have you ever been blogging for?
you make blogging glance easy. The total look of your site is excellent, as well as the content!

Very soon this web site will be famous amid
all blog users, due to it's good posts

We are a bunch of volunteers and opening a brand
new scheme in our community. Your website provided us with useful
info to work on. You've performed an impressive job and our entire neighborhood might be thankful to you. 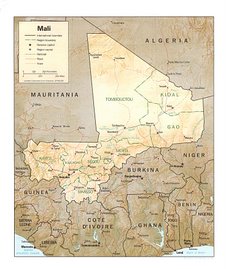 This is a Flickr badge showing photos in a set called Peace Corps Training. Make your own badge here.

The contents of this website are mine personally and do not reflect any position of the U.S. government or the Peace Corps.